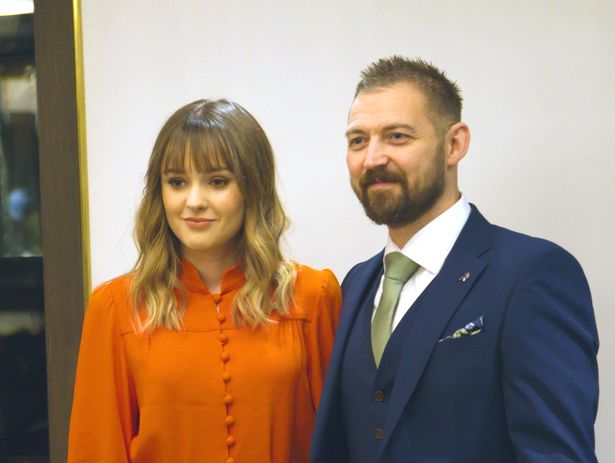 Posted by Hebe Cockcroft on 23rd December 2018 | Featured | No Comments

South Shields dad Lee Shone is finding himself in the spotlight more than ever, with his rising acting career landing him in the national spotlight.

Lee, a former fighter now forging a career as an actor, is becoming well used to mixing with the glitterati and most recently he was back in front of the cameras at the 39th London Critics’ Circle Film Awards in London.

The 42-year-old, who has appeared in the likes of Death Race 4: Beyond Anarchy and is now signed with a Hollywood agent, was picked alongside actress Molly Wright to announce the award nominations at The Mayfair Hotel this December.

“It’s been a crazy year,” said Lee who is currently looking forward to a break spending Christmas with his family.

The dad-of-four, who started out as a no-holds-barred fighter and became the UK’s first mixed martial arts world champion, draws upon some of those skills in action films.

And expert techniques acquired during his subsequent job performing rope rescues on oil rigs proved a further string to his bow as he made the move into acting.

Previous roles have since included parts in a Death Race film; 2017’s British crime biopic My Name Is Lenny and upcoming movie The Corrupted.

It was after joining London film company Dover Street Entertainment, founded by film and documentary-maker Graeme A Scott who is originally from North Shields, that Lee was then picked up by a Hollywood agent.

At the London Critics’ Circle nominations, he and Molly – who has appeared in TV dramas and made her film debut in 2017 film Apostasy – highlighted the professional critics’ pick of the best films which have had a UK release between February 2018 and 2019.

Following the nominations, the red carpet awards ceremony, which has Dover Street Entertainment as a headline sponsor, is set to take place on January 20 – with Lee again in attendance, to help host the results.

He said: “The acting world is a far cry from my garage in South Shields, when I was training with ropes and sacks to be an MMA fighter, but the determination and tenacity to succeed is exactly the same”.

Lee, who currently has films in production and recently voiced a character in videogame Death Race: Beyond Anarchy, has made things happen for himself, while his skills also soon came to the attention of such famous names as Tom Hardy, with the Lawless and Peaky Blinders actor even pictured wearing a T-shirt emblazoned with Lee’s name .

Lee recalled: “Tom Hardy modelled his character in blockbuster Warrior on me and he made the cast wear T-shirts with my name on – at all the press junkets and on set!”

He is looking forward to returning to London for the star-studded awards night.

The Critics’ Circle awards have been taking place since 1980 and among the winners over the years have been Cate Blanchett, Gary Oldman, Michael Fassbender, Emma Thompson, Carey Mulligan, Martin Scorsese, Quentin Tarantino and Christoph Waltz.

Last year Kate Winslet took the Award for Excellence in Cinema while Film of the Year went to Three Billboards Outside Ebbing, Missouri and British winners included God’s Own Country, Dunkirk and Paddington 2 .